Puppy Tales is devoted to the promotion of good relationships between dogs and people. This means exploring the further integration of dogs into our society and highlighting the benefits and enjoyment they can bring to all members of our community.

We want to help our readers live the best life with their dog. Dog Tales of Australia on the Today Show on Channel 9

“Jet Setting Pets” on the Today Show, Channel 9 Filmed  18 December 2019 Soooo, yesterday this is what we were doing!  We were appearing on the Today Show to talk about travelling Australia with your dogs and the best pet-friendly holiday destinations around the country. I’m so proud of Keiko and Summer for their bestest […]
read more

Pooches at Play on Channel 10

Dog Photography Tips with Puppy Tales Photography on Pooches at Play, Channel 10 Aired July 15th 2017   As well as being the official show photographer for Season 1, I also filmed a segment with Gyton Grantley to help dog lovers take better photos of their dogs.  The segment aired in Episode 1. Pooches at […]
read more

The email notification came through , the latest Dogs Life Magazine is available and I had to drop everything to check it out!  You see I was asked to provide input for an article on taking great photos of your dog.  Flicking through the magazine, I excitedly saw that Rosie was the feature photograph for […]
read more

Keiko is featued on Yummypets!!

Have you heard of Yummypets yet? It’s social media for our pets!  And while Keiko and Kimba have only had their own profiles for a short time they have been made more than welcome in the community!  In fact, Keiko was last week featured on the yummypets blog last week! Read his, er our, interview […]
read more

‘Pawtraits’ Exhibition in the News

So….. it appears that the ‘Pawtraits’ Exhibition appeared in the newspapers.  Look there’s Crystal and Nancy!!  ‘Pawtraits’ Exhibition in the News | Akemi PhotographyOh and I’m in there with Nola who was exhibiting her beautiful textiles!  I did not even realise that this had happened, fortunately the RSPCA media scanner picked up this first one […]
read more 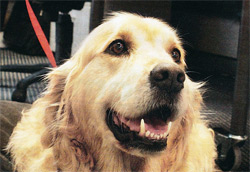 If you got the Sydney Morning Herald on Saturday you would have also got their special ‘Employer of Choice’ lift-out. This year the feature article focused on the impact pets have in the office and why a growing number of businesses are allowing their employees to bring their pets to work. Because I have written […]
read more

When I first thought about starting Puppy Tales I figured that we would get the website done, upload it to a server and instantly get traffic beating down our door. In reality it has been a lot of hard work to build up traffic, develop relationships with manufacturers and start getting consistent sales. But it’s […]
read more

Kerry is also happy to connect you with members of the Puppy Tales Contributor Team for contribution or commentary on their areas of expertise.