Once in awhile it’s right to take time to stop and think about the sacrifices made for us by others. Wednesday 11th of November at 11am is the time when the Australian nation (and other countries around the world) does just this: Stop to think.

Silence is appropriate, because sometimes there are no words. When our brave servicemen and women acted rather than talked, for us to make mere comment is inadequate. But it’s both fitting and sobering to to recall their deeds, so that we never take our freedom for granted. 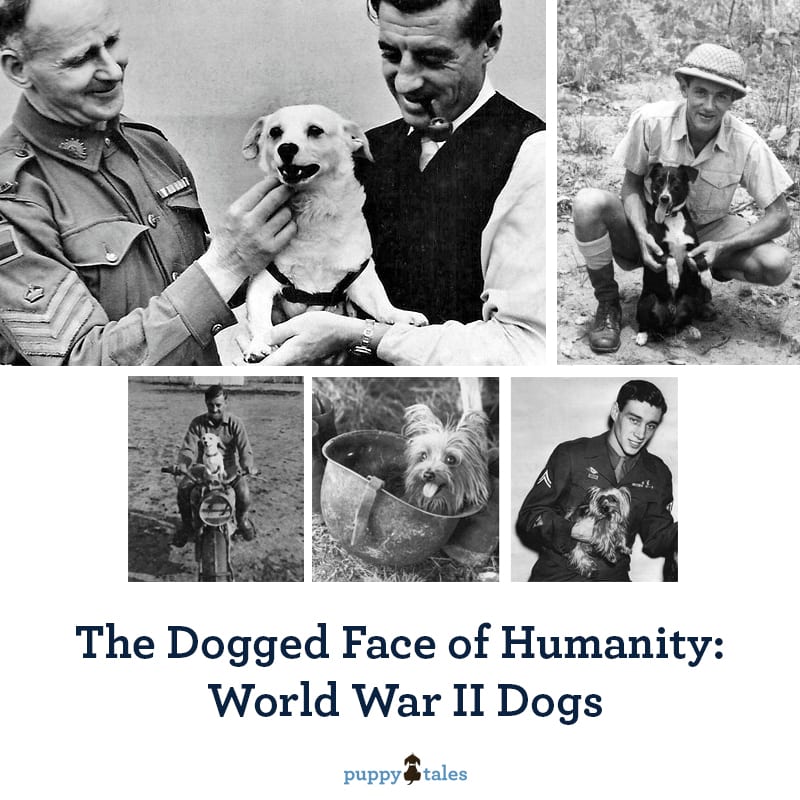 In an earlier post Canine Heroes: Dogs in Wars, Dogs of Hope I looked at those incredible canines who served in World War I. Dogs such as Digger and Paddy, who were humbling in their brave service. In this second post, I move forward in time to World War II and the dogs who saved lives and lifted morale.

When researching the stories of Horrie, Gunner, and Smoky, it struck me they were accidental heroes. They were dogs in the wrong (or right?) place at the wrong time and become entangled in the affairs of man.

Many dogs were enlisted to serve in the war, but these were mainly guard or sentry dogs, or scouts used to sniff out the hidden enemy. Indeed the Germans experimented with strapping explosives to dogs, whilst the Americans trained dogs to attack Japanese soldiers. Neither attempts went well, and thankfully the ideas were dropped.

But it is three “accidental heroes” I look at today. Ordinary dogs doing extraordinary things and who, amidst air raids and mass murder of machine guns, ironically represent the best side of humanity. So let’s not waste words but let their deeds speak for themselves.

Gunner was an innocent victim of war who became a hero.

On 10 am, February 19, 1942 the Japanese bombed Darwin. During the air raid a six-month old Kelpie became trapped beneath a collapsed mess hall on the airbase. He was pulled out by Leading Aircraftman Percy Westcott, who saw the dog had a broken leg and took him to the army doctor.

The medic would only treat “men” with a name and serial number, so quick thinking Westcott immediately replied this was “Gunner”, serial number 0000. The doctor duly set the leg in plaster and dismissed the Air Force’s newest recruit into the care of Leading Aircraftman Westcott.

Westcott took good care of Gunner, and within a short time his kindness had unforeseen rewards. On this first occasion Gunner started to act strangely, whining, pacing, and refusing to settle. His agitation grew and a now frantic Gunner barked at the skies as some 20 minutes later Japanese warplanes hovered into sight.

Not only that but Gunner repeated this early warning, time and time again. Indeed, he recognized the difference between Allied and Japanese planes, only reacting to the later. This gave troops valuable time to get their planes airborne or take cover. Indeed, Gunner’s early warning was so reliable that Westcott was given a portable siren to sound at the first sign of the dog’s agitation, and Gunner’s sensitive hearing went on to save incalculable numbers of lives.

Smoky proves you don’t have to be big to be brave. She was a tiny stray, abandoned by the side of the road, scrawny and starving. She was found by an American GI who then offered to sell her to dog-lover Corporal William Wynne. Unable to resist this scraggly waif, Wynne spent two Australian pounds, a considerable proportion of his pay, to buy her.

Corporal Wynne named the stray Smoky, fed and cared for what turned out to be a 4-lb Yorkshire terrier. Over the next 18 months they were inseparable and together they survived 12 co

mbat missions, innumerable air raids, and typhoons. As well as her positive effect had morale, Smoky did an extraordinary deed by laying a telegraph cable.

This happened when Wynne and Smoky were stationed on an island in the Philippines, which was under constant attack by the Japanese. Air raids destroyed the communications between the Air Base and the outside world, and so engineers needed to lay a new cable.

The problem was this meant digging up the damaged pipe and exposing workers to the danger of enemy attack. However, Wynne thought Smoky small enough to squeeze through what remained of the pipe and devised a plan to tie a string to Smoky’s collar, have her run through the pipe, and then attach a cable to the string.

The engineers gave it a go. With Wynne at one end of the pipe and Smoky at the other, he called his dog. And she came! She negotiated areas with just four-inches of headroom, but get through she did – enabling engineers to save time and lives, re-establishing communications.

When the war ended, Wynne and Smoky toured hospitals. He had noticed Smoky’s ability to raise the spirits of those she met, and together they helped the recovery of many hospitalized ex-servicemen.

Our final true story has a bitter-sweet ending.

Horrie was also a stray, an Egyptian white terrier, found in the Libyan desert in 1940. Private Jim Moody adopted the starving dog who became much-loved by the Diggers and an unofficial mascot. Horrie travelled to Egypt, Greece, Crete, Palestine and Syria, proudly wearing a special coat, complete with a gunner’s disc and identity tags.

Horrie had a talent for detecting enemy planes and sounding the alarm by barking. He learnt this trick when Moody had Horrie tucked inside his jacket, whilst on a motorbike foray. The pair were buzzed by a Stuka aircraft, which forced Moody into a ditch. Horrie escaped from Moody’s jacket and stood barking at the sky. After that whenever he heard an approaching plane he sounded the alarm, giving time for the Diggers to run for cover.

However, Horrie’s most dangerous exploit was yet to happen – his return to Australia in 1942. Because of the risk of importing diseases, it was strictly forbidden to repatriate dogs. Moody’s commanding officer knew this and threatened to throw Horrie into the ship’s furnace. However, Moody and his company were having none of it and promised to mutiny if the act was carried out. The Captain, knew they were in earnest and wisely decided to turn a blind eye, allowing Horrie to enter Australia. But the dog’s peril didn’t end there.

Moody and Horrie lived quietly for 3 years…until disaster. He and Horrie helped raise money for the Red Cross – but in so doing Horrie came to the attention of the authorities. Despite being in the country for 3 years already (therefore proven rabies free) an order was issued for Horrie’s destruction.

On March 12, 1945, a dog matching Horrie’s description was euthanized. Moody held a funeral, but the coffin was empty – because quarantine laws meant the body could not be released.

The nation was distraught. There was a public outcry over the “Murder of a war hero” and questions asked in the House of Representatives.

But did Horrie die? There now seems reason to believe the ever resourceful Moody substituted a dog from the pound, of similar appearance, in Horrie’s place…and Horrie lived on for several years in Corryong, Victoria.

Lest we forget the men, women, dogs, and other animals who served.