by Lisa
kids and dogs

According to the latest research from the journal Pediatrics contact with dogs may reduce the number of respiratory tract infections during a baby’s first year! Apparently babies who grow up in a home with a dog or cat are less likely to get sick than children with no pets. This study further supports the notion that keeping a young child’s environment over sanitised is not good for their health.

What did the study specifically look at?

The researchers from Finland followed the progress of 397 children over their first year through weekly questionnaires about infectious symptoms combined with information about their contact with dogs and cats. These questionnaires were filled out from 9 weeks after the baby was born until their 52nd week. In relation to their pets families were asked if there was a cat or dog at home and how much time it had spent inside daily.

Confounding factors that could affect the results were also considered and adjusted for in the results. These included birth date (season), birth weight, number of siblings, parental smoking, family medical history and breastfeeding.

The results of the analyses showed that children who lived with dogs were healthier than kids with no dog contact, as they had fewer respiratory tract infections and fewer courses of antibiotics. In comparisons between cat and dog contacts, the kids exposed to dogs were healthier than the cat owners. The study also showed that children living with dogs that only spend part of their day inside (less than 6 hours) had a lower risk of respiratory infections, suggesting that outdoor dogs bring in more dirt further developing the immune system.

Researchers think that exposure to pet dander as well as the microbes they carry into the home from outside could prime babies’ immune systems (especially in the first year) and train them to fend off attacks from allergens and bugs. One of the researchers, Dr Eija Bergrowth, stated: “we think exposure to pets somehow matures the immune system so when the child meets the microbes, they might be better prepared for them”.

What does this all mean for you?

Despite the good news I don’t think if you are having a baby you should rush out and get a dog to protect your baby from colds. As we all know a dog is a big commitment so to introduce one to a house that is about to welcome a newborn would be hectic for everyone. But it definitely does rule out the suggestion that you need to get rid of your pets out of fear they might pass diseases onto your baby and create an unhygienic environment. I know Cress and Eddie have spent a lot of time with my daughter Isadora and have been known to give her a quick lick any opportunity they get 🙂

If you’d like to read the full scientific paper, check out the full PDF version here. 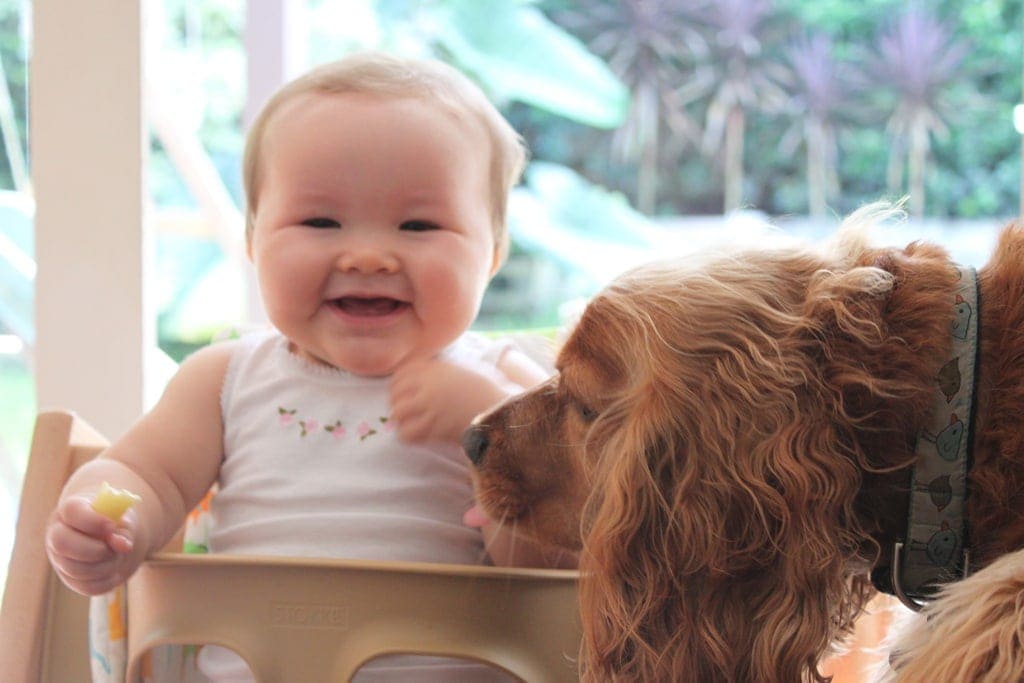