You love your dog, they bring incredible happiness and are part of the family, but would you trust them with your life everyday?

Actually, this is what the visually impaired people who are Guide Dog Handlers do every time they go out with their Guide Dog.

April 29th is International Guide Dogs day. As part of the lead up Guide Dogs Victoria, has an “Access all Areas” campaign to raise awareness of the prejudice and distraction faced by working dogs and their handlers. 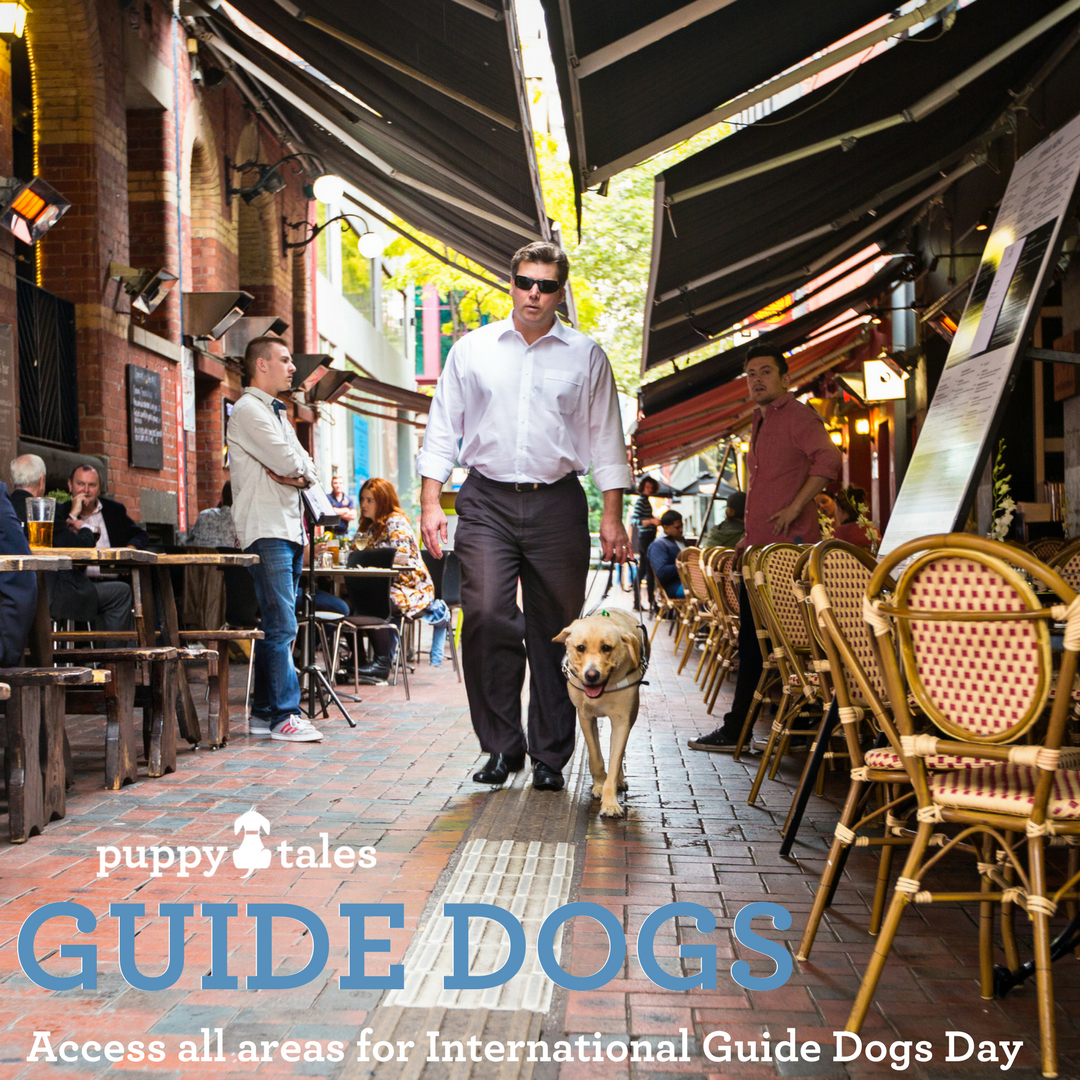 As part of the event, I was privileged to have a Guide Dog leading me (blindfold) through the busy Melbourne streets, and learn first-hand what it’ like to trust your life to a dog.

But we’ll come back to this shortly – first, I want to introduce David and Ollie. 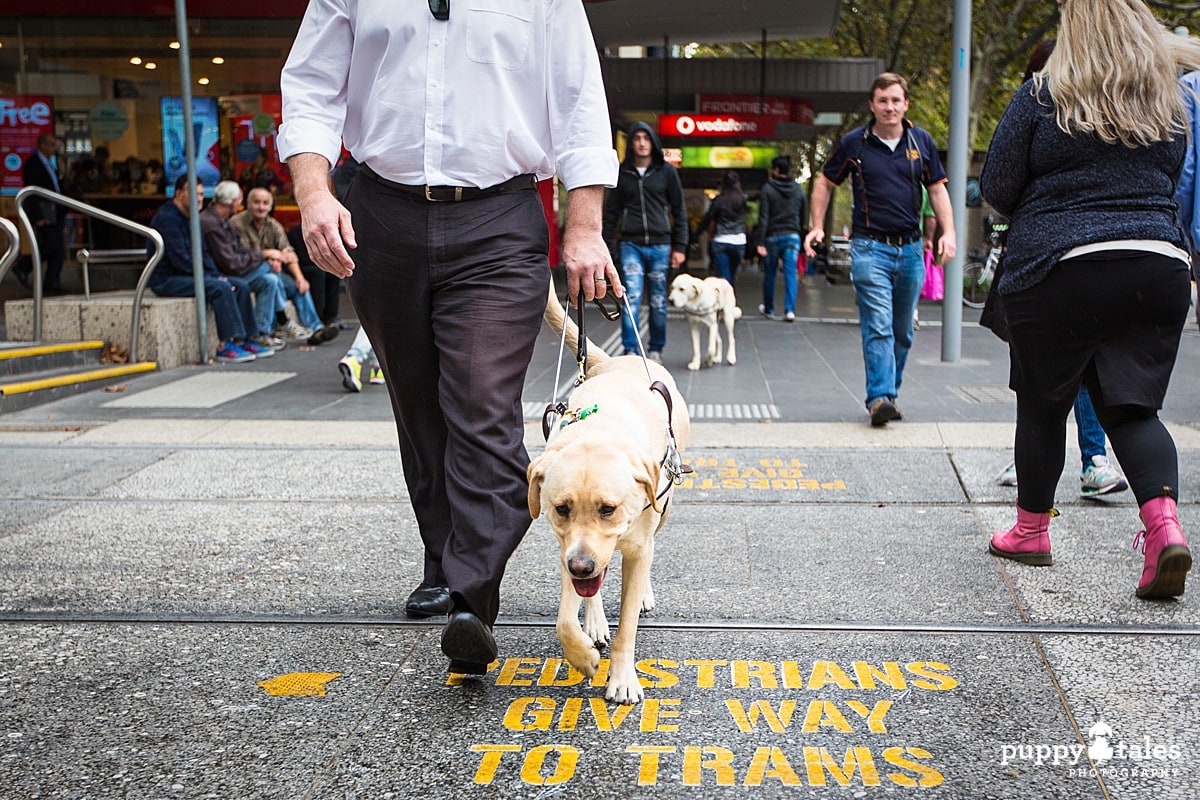 David is a married man with two children of four and six… and a three-year old guide dog, Oliver. Among many other things, he runs a business, attends meetings, and catches planes – the latter made possible because of the help Ollie gives him.

David has a degenerative eye condition called Retinitis Pigmentosa and is legally blind. But because his vision has deteriorated slowly since childhood, David hadn’t realized how his world had shrunk – until he got Ollie. Simple things like grocery shopping or collecting kids from daycare had become too risky, stressful, or hard…but Ollie changed all that. 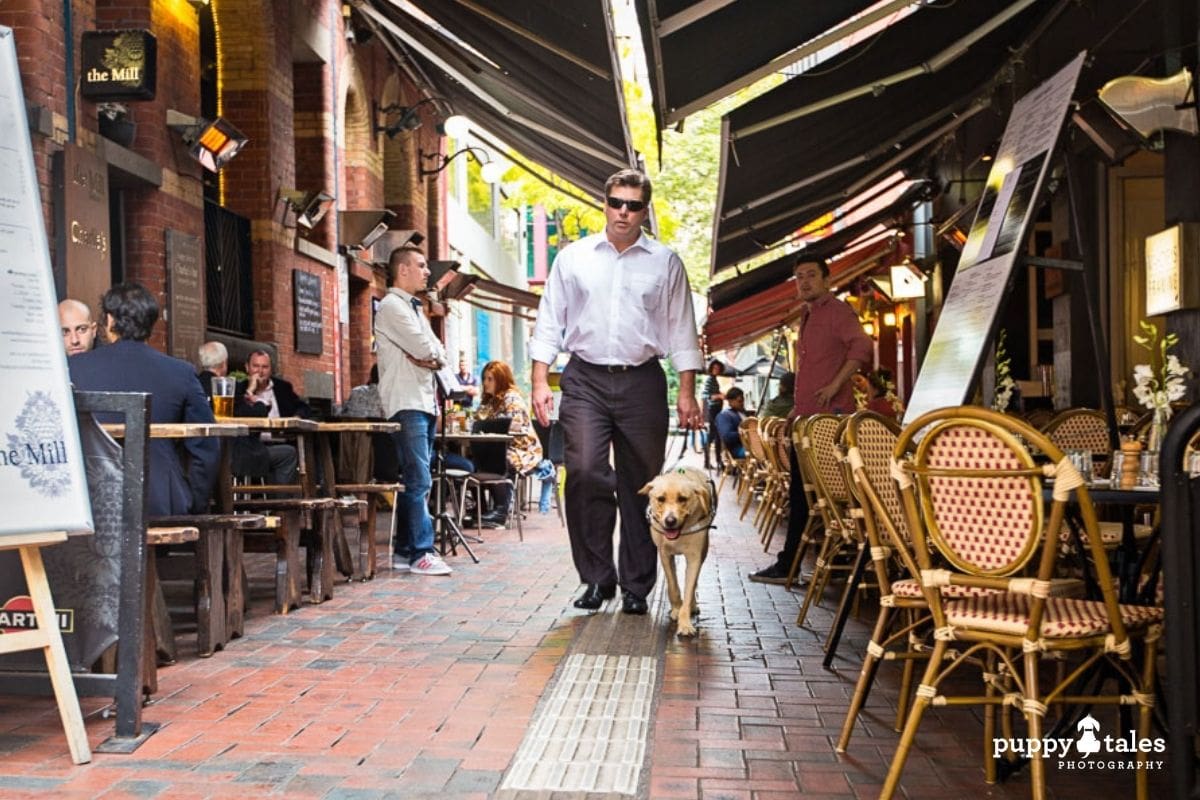 With Ollie’s assistance to avoid obstacles and guide, David has been able to reclaim many family and personal tasks and get his independence back. In addition, his family worries less, knowing David is in safe paws when he’s out.

Ollie has been with David a year. It takes a long time for dog and handler to understand and come to fully trust one another so David and Ollie are now coming into this. This is not a quick process, but it is a life-changing one, which is why I was so thrilled to experience being guided by Woodrow. 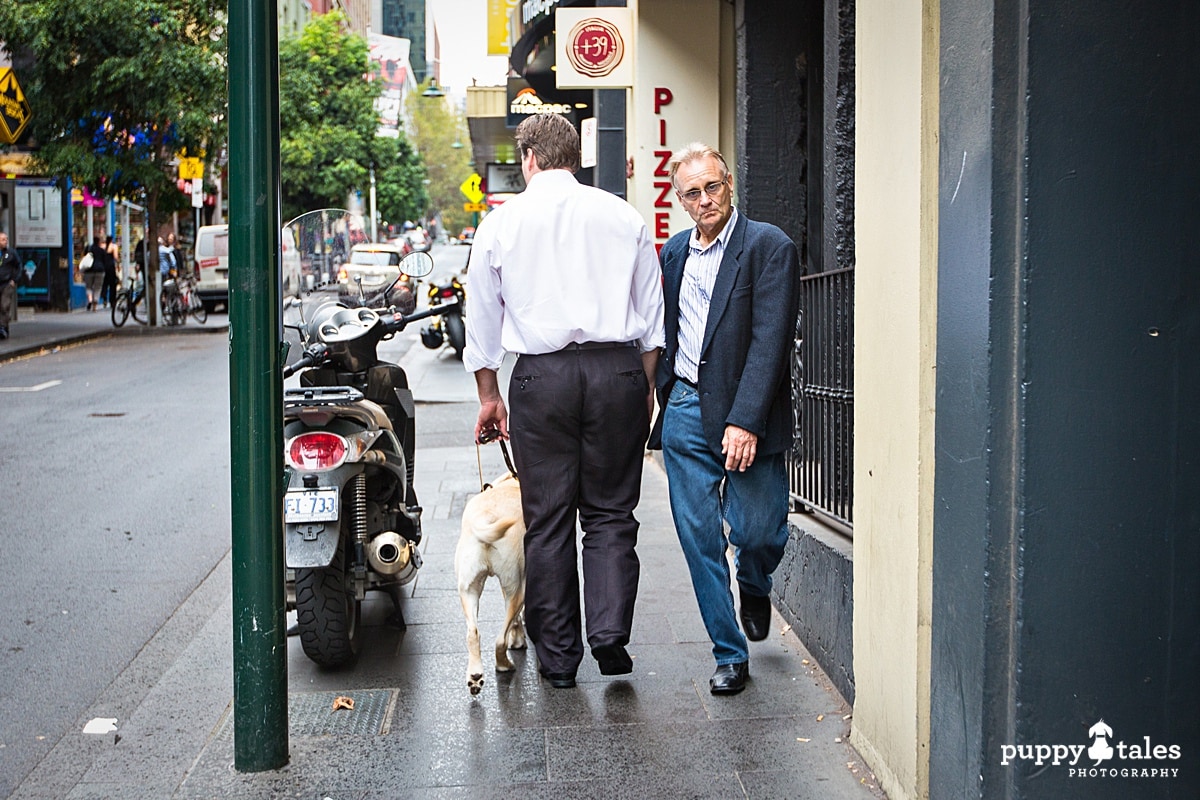 My Guided Experience through Melbourne

Woodrow is a Guide Dog under training, and did a magnificent job. Once blindfolded, I hadn’t realized how vulnerable it would feel placing my trust in a Guide Dog. But guide me he did. Woodrow changed direction so subtly that at time I didn’t realize I was altering my course. For example, I had no idea we had navigated around a park bench – until I saw the video that had been taken.

The other thing that struck home was how much the city noises hampered my hearing. The traffic sounds confused me, such that I could hear the audible traffic crossing signals, trams, traffic and people but had no clue how far away they were or which specific direction they were coming from.

You all know I love all dogs, but through this experience I gained even more admiration for the amazing Guide Dogs that are both family member and essential assistant. Not only is their job a difficult one, but it is made more so by other people’s actions. 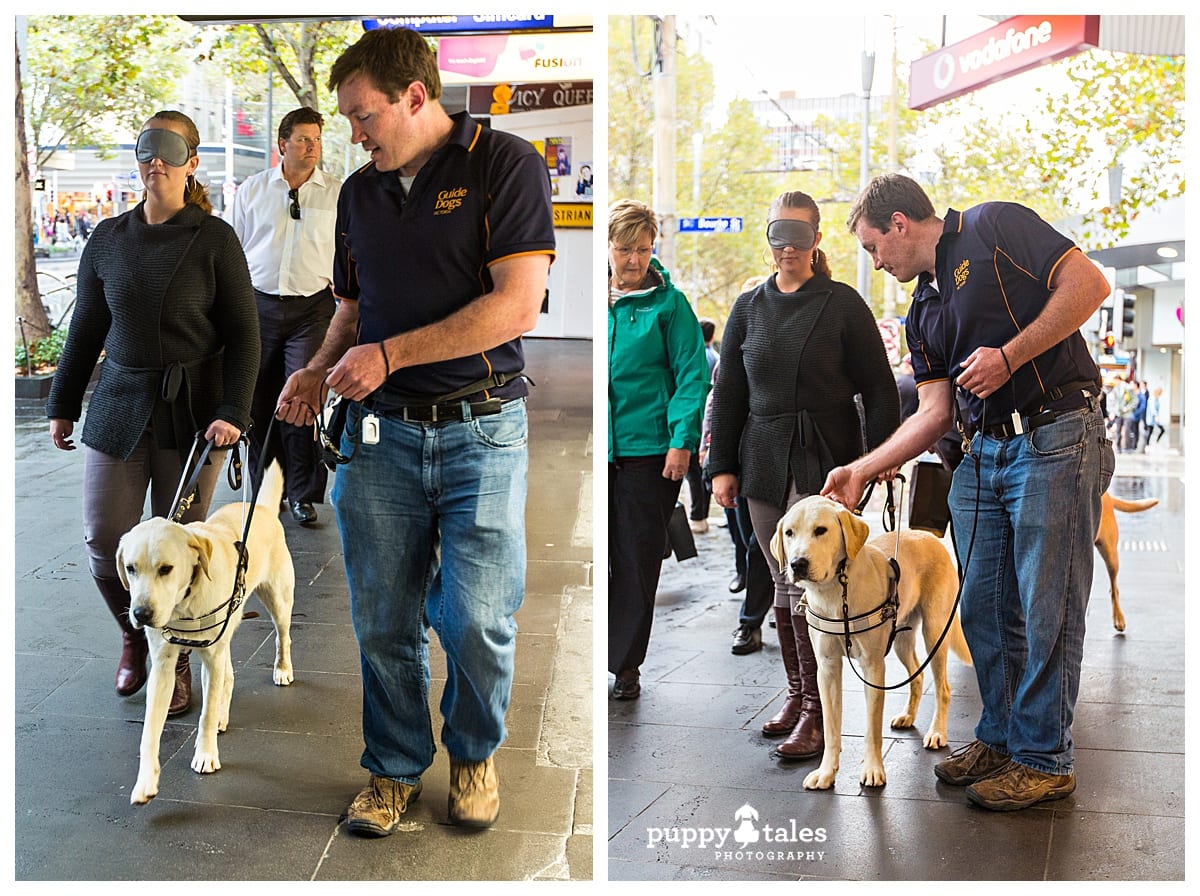 Learning how to work with a Guide Dog

Discrimination against Guide Dogs and their Handlers

Legally Guide Dogs and their Handers are allowed just about everywhere, which includes public transport, concert halls, restaurants, and cinemas. However, discrimination can be a subtle thing, and I was shocked and saddened to learn that two out of every three handlers suffer it on a regular basis.

One subtle form of discrimination is a business with a cluttered floor, which makes it too dangerous for a blind person to enter. Many times the discrimination is more obvious, such as putting a Guide Dog Handler in less favourable seating near the kitchen or toilets of a restaurant.

Indeed, David sited a specific problem with taxis – a vital means of getting around for a blind person. He’s aware many taxis fail to stop for Guide Dog Handlers, preferring to pick up the next fare instead. Indeed, hard as it is to comprehend such behaviour, David once had Uber services booked for him, only to have them turn up, refuse to take him, and drive away…hence the importance of the “Access all Areas” campaign. 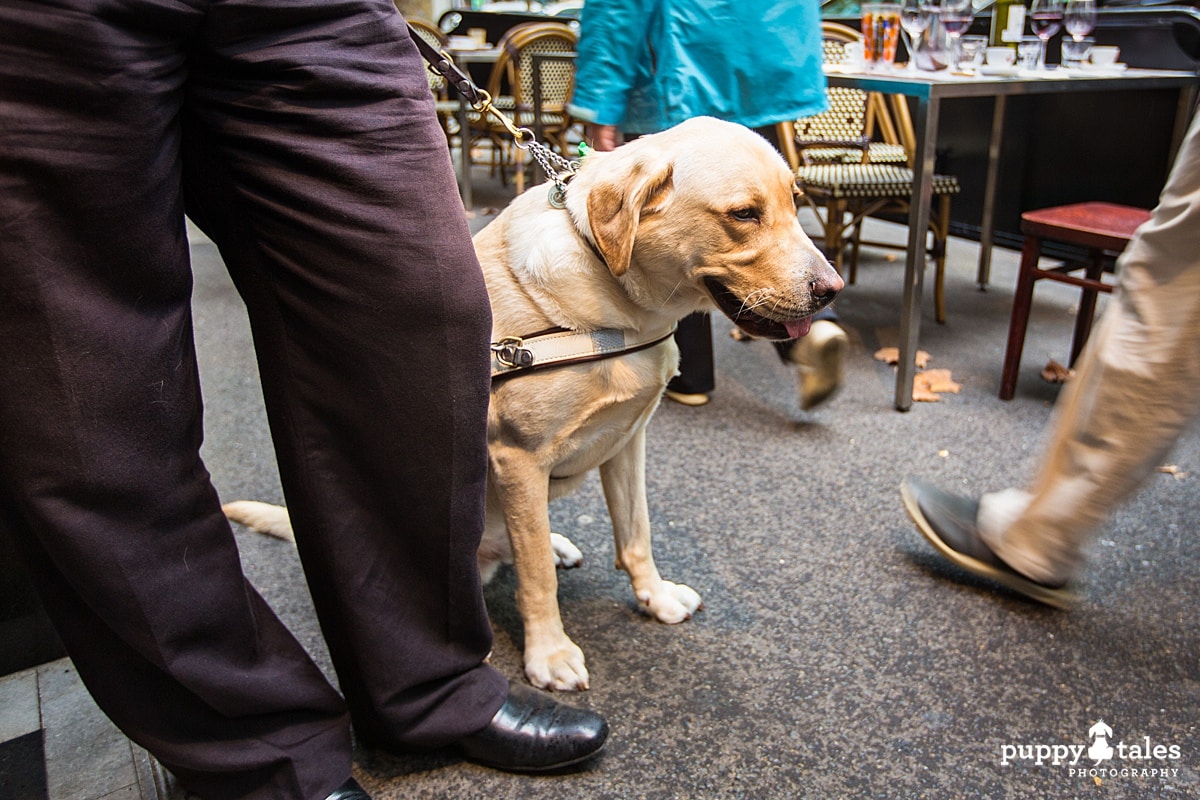 It may come as a surprise to you, but even dog lovers aren’t immune to creating problems for Guide Dogs. The trouble is they are such gorgeous dogs we want to fuss on them, which is a major distraction for a working dog. Indeed, worse still are dog-on-dog injuries – a major reason for early retirement of these fantastic animals.

As a result of my experience, I’ve put together the ‘Guide Dog Golden Rules’ 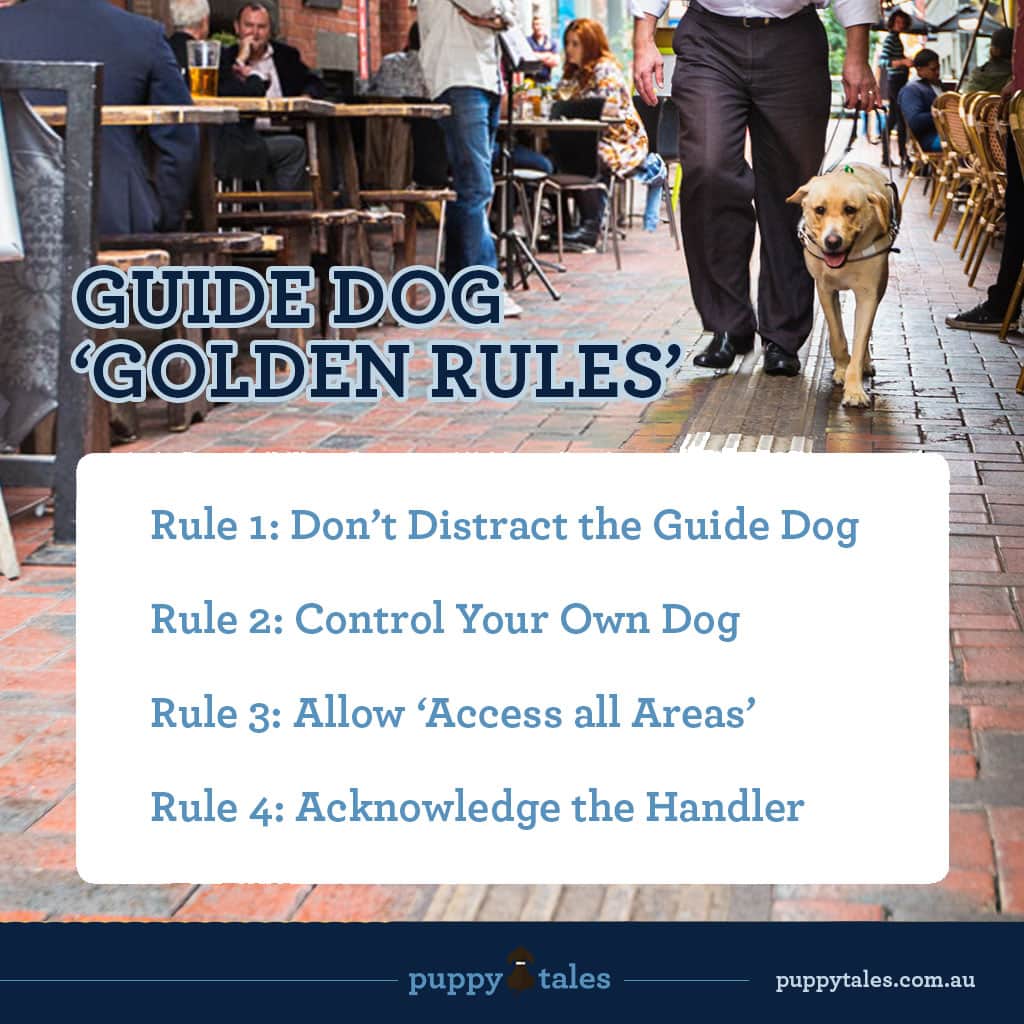 This is the most obvious of the rules, and one that it seems many people are now aware of, but on occasion choose to ignore. A Guide Dog in harness is working, and to pat, talk, or whistle to them is a distraction. As David explained to me, many people say, “I know I’m not supposed to touch your dog but I can’t resist.” – Hence acknowledging they are wrong but still behaving in a selfish manner.

Rule 2: Control Your Own Dog

One working Guide Dog every month is attacked by an off-lead dog. This is unspeakably traumatic for the handler, and (physical injuries aside) can seriously impair the working dog’s confidence. Indeed, dog attacks are a major reason for early retirement of Guide Dogs, which represents a huge loss to the handler and a huge drain on the training organizations. One particular flash point is dogs off lead near their home. The familiarity of the casual “comfort” break means the dog owner is often relaxed and not fully alert to the threat their dog poses to others. Keep your dog (even friendly ones) on a lead around Guide Dogs, and if your dog isn’t friendly, cross the road to avoid them.

If you run a business make sure it’s accessible to Guide Dogs and their Handlers. Apart from anything else, it makes good business sense. The blind are a community and will recommend Guide Dog friendly places to their friends and family – drumming up extra trade. 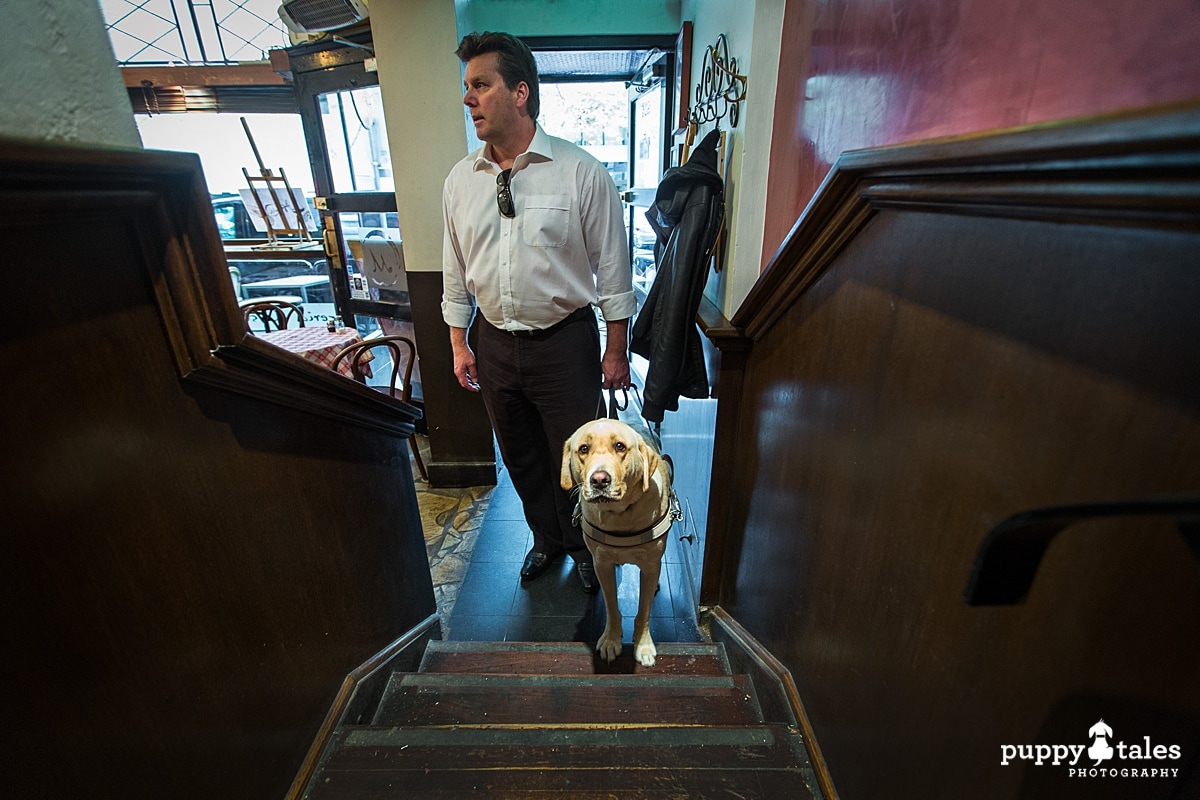 David & Ollie frequently cafes they know they are welcomed

An extra rule… At this point I’m going to add an extra rule, one based on observing David and Ollie at work…something I realise I’m guilty of. Being a dog lover I’m naturally drawn to the dog in the team. This means I might “forget” the human on the other end of the harness. After spending an afternoon with David it seems my habit is not unusual. So be considerate and…

Yes, the dog is gorgeous, but be sure to include person right there in your in conversation whilst lavishing attention on their four-legged partner. Chat to the Handler, ask them how their day is going, ask if they need assistance, and offer help were necessary.

Being with David and Ollie helped me appreciate just what a team effort this is, with each having different skills. For example, David plans how to get from A to B and when to cross a road, but it’s Ollie who judges distances, separation between objects, heights, and hazards to choose a safe path forwards. 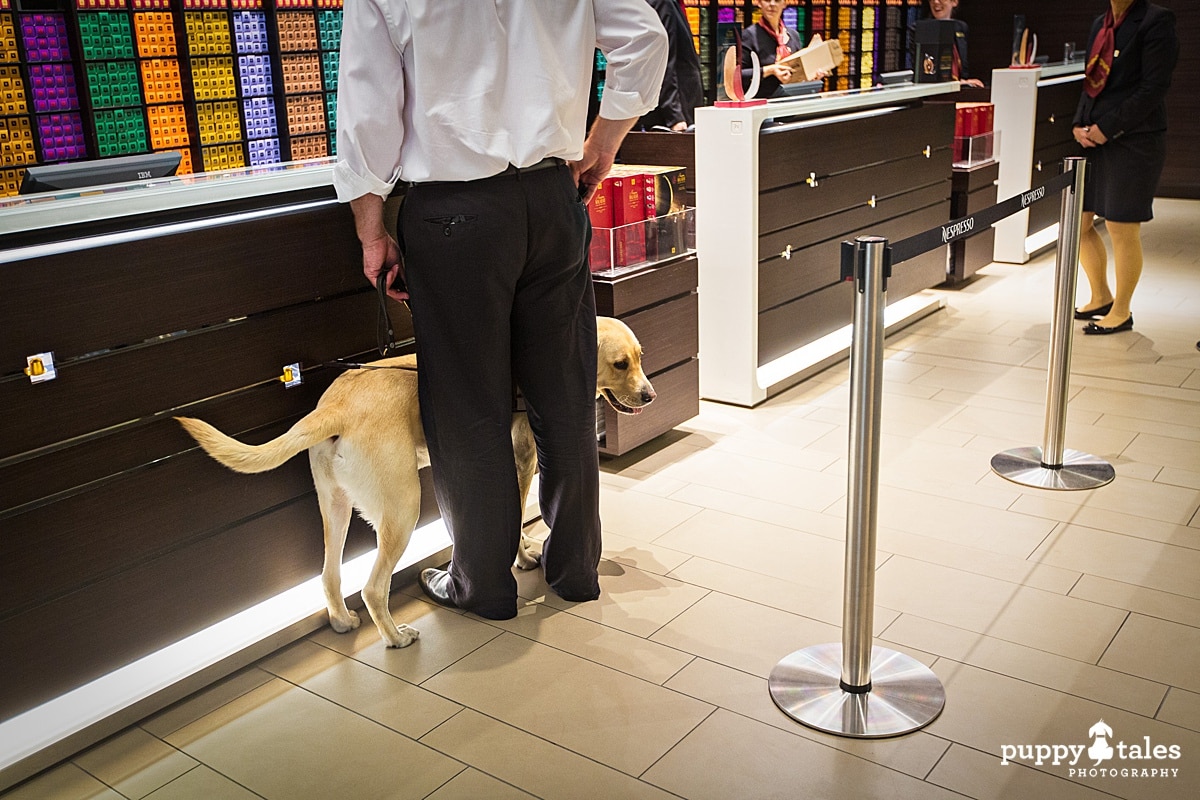 And you too can play your part in this team by following the golden rules, and providing “Access all Areas”. 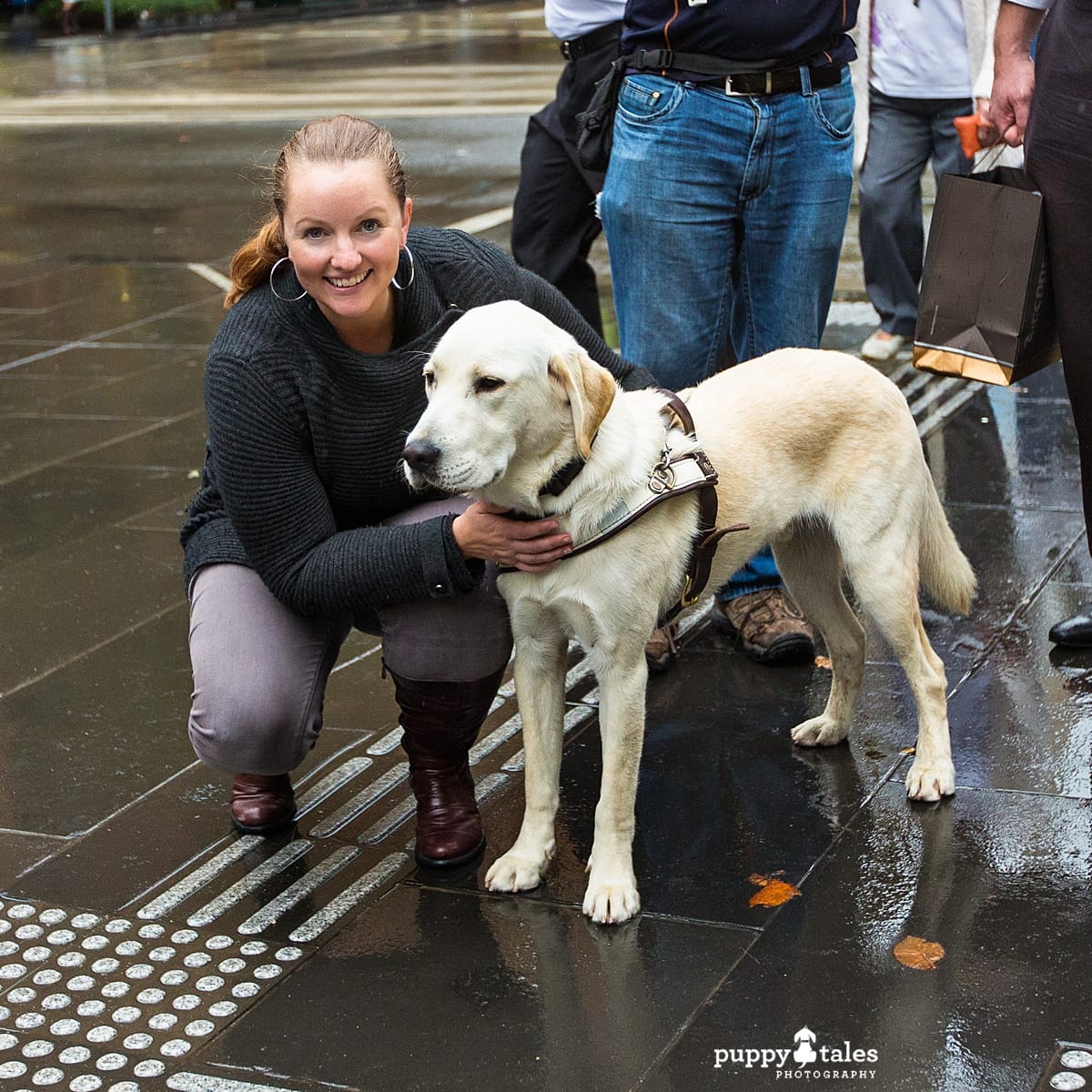 I would like to extend my special thanks and appreciation to David & Ollie, Ed (Guide Dogs Victoria Trainer) and of course, Woodrow (Guide Dog under training).