by Lisa
kids and dogs

A new member joined the Puppy Tales team on June 28. That’s when our baby girl, Isadora, finally arrived! I wanted to follow up on our ‘Introducing your dog to a new baby‘ post to let you know how our initial introductions and first couple of weeks have gone.

We strived to follow as many of the recommendations about the best and least stressful way to introduce our pooches to Isadora, and have done that pretty successfully. During our hospital stay my parents looked after Cress and Eddie, and they were able to take home one of the singlets that Isadora had worn. The dogs also got to maintain their schedule of regular walks and ball throwing, so they weren’t feeling too neglected while we were away.

When the day came for us to leave the hospital and bring our beautiful bundle home, my husband and I went into the house first to greet our ecstatic dogs, give them a treat and play with them in the backyard while my Mum carried Isadora into the house a few minutes later. Eventually they came inside and sniffed Isadora in my Mum’s arms while we patted them.

The dogs were certainly curious about this little person that had suddenly materialised in their house, but they took it in good spirits. At no stage did we feel that they were threatened by the baby and they certainly weren’t aggressive towards her. To begin with we just let Cress and Eddie sniff Isadora’s feet and have a look at her through the bars of her crib. After the initial few minutes the dogs forgot all their excitement and went their own way, but predictably they had different reactions. 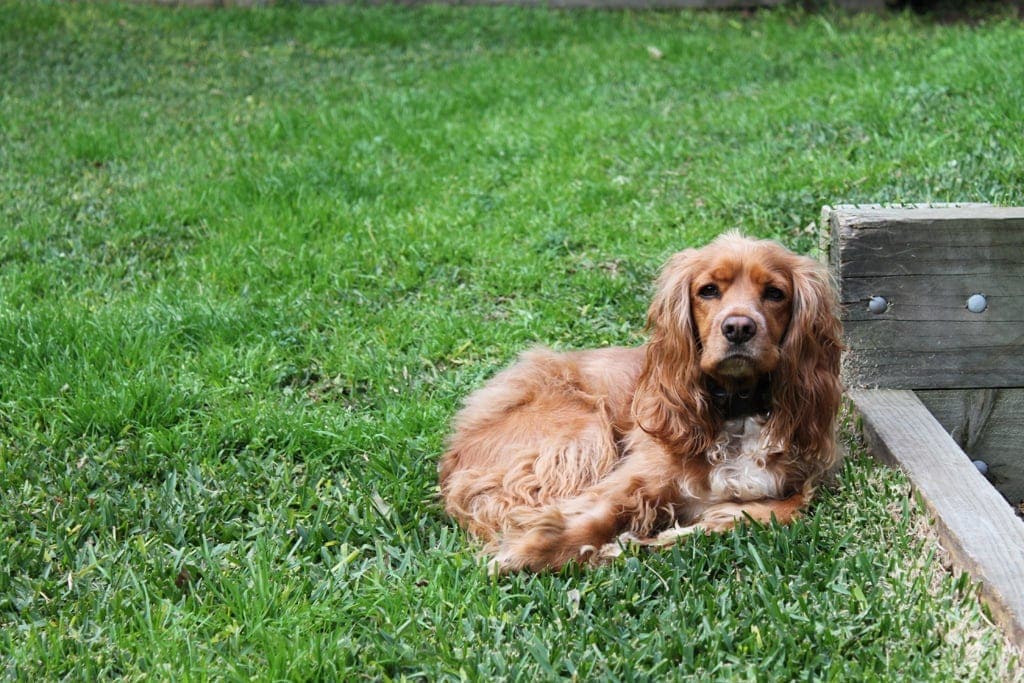 Cress sulking in the backyard!Cress, ever the grump, somehow made the connection between my absence and the new changes — which probably appeared to him to be solely a loud noise generator — and decided to spend the day outside, frowning at us through the window. Eddie, who’s always a bit more carefree, took it in her stride and resumed her favourite position on the couch. I think that’s the nature of dogs: they all have different personalities and you can’t expect them to change that, you just have to work with your own dog as you know best.

Over the next few days we have gradually given them a bit more contact with her and now both of them peacefully sleep on the couch next to us while she breast feeds. (And can stand at least 5 minutes of screaming, but still make a quick exit for anything longer.)

We’re very happy with how the introduction has gone, and can’t wait until Isadora is old enough to play with her furry pals. Already we can see Cressie becoming protective of her and we’re sure they’ll be lifelong friends. We’ll keep you updated with how it progresses. Hopefully there won’t be too many pulled Cocker Spaniel ears!