Capturing an Amazing Action Photo of Your Dog in the Snow!

Ears, snow and legs all flying!

The execution, however, wasn’t all that easy.

I thought some might be interested in a little behind the scenes as to what went into creating ‘the perfect jump shot’! It was just one split second in which the magic would be captured. It is that split second for which everything had to come together – the location carefully selected, Rosie’s people and my helpers hiding, me lying in the snow, and most importantly, the timing spot on! 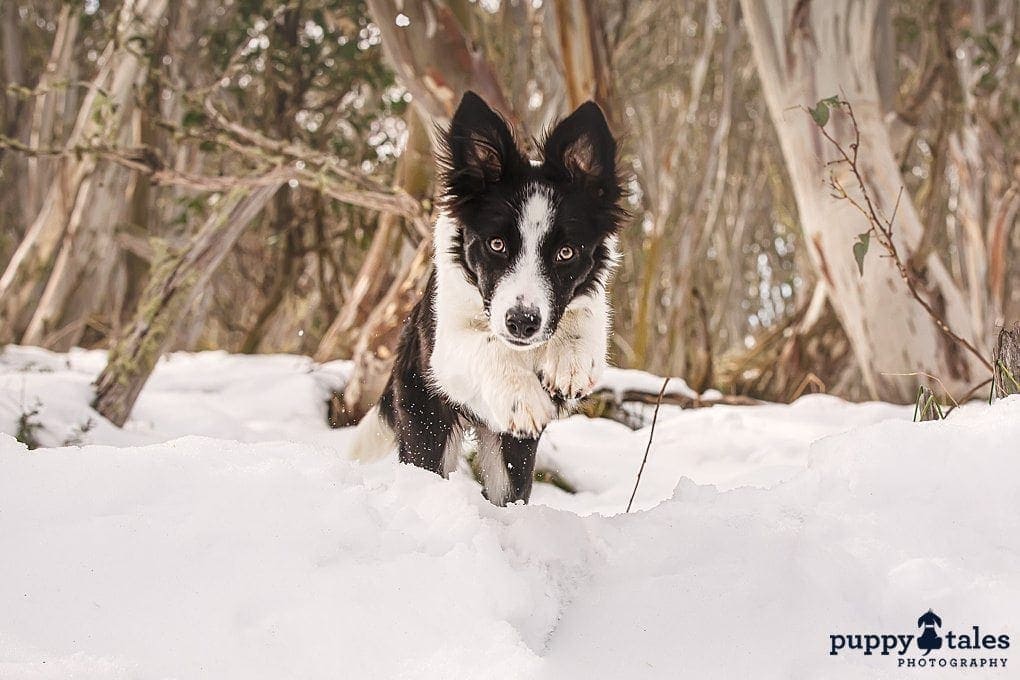 One of the most vital elements was finding the right location for photographing a dog jumping over a snow covered log.

We had to find a spot where a dog would feel comfortable to race through the snow. So the snow couldn’t be too deep. It had to be some place with a natural path that would automatically lead Rosie to jump over a log.

We also had to a find spot where those assisting me wouldn’t be seen in the final photo. We had to make sure that there were suitable hiding spots from where they could do their ‘job’ without coming in the camera’s view. Trees and other snow covered branches proved to be perfect cover for them in the spot we found just outside the Dinner Plain village.

Last but not the least, my job as a photographer was to capture the best angle at the right moment with the right amount of light. So I had to find the spot within this from where I could achieve this. I tried a tested the viewpoint from a couple of spots and then settled on the one I liked the best. What this meant though was lying in the snow on the other side of the snow covered log. 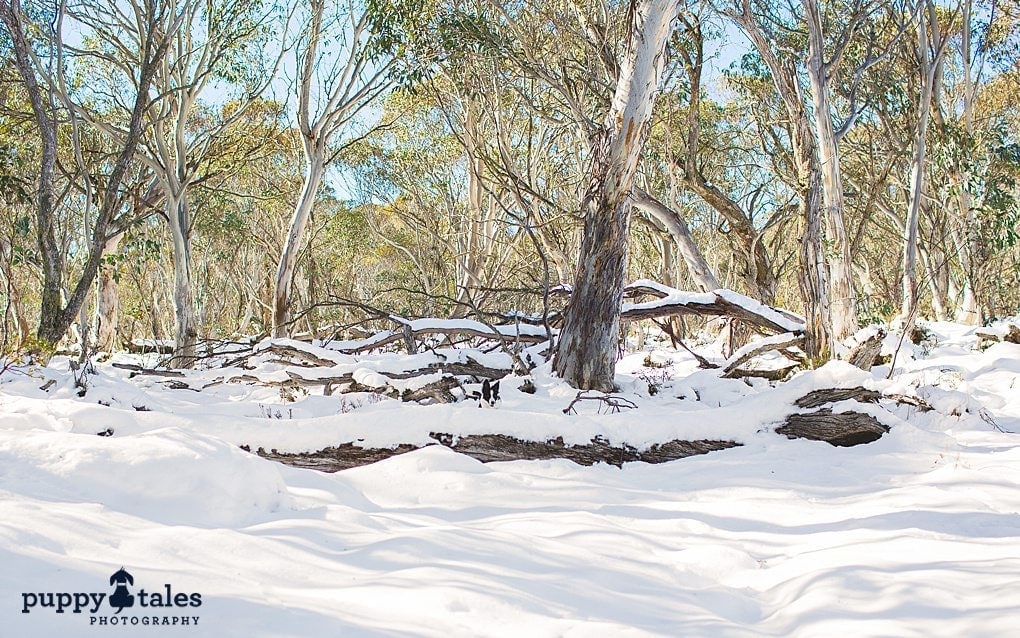 Preparing for the Shot

We had to give Rosie a natural and fun environment to play in. We encouraged her to run the perfect path in the snow a couple of times accompanied by her humans. Then using people at either end of the path we’d worked out, yummy treats were used so that Rosie would run it alone!

One of the outtakes: 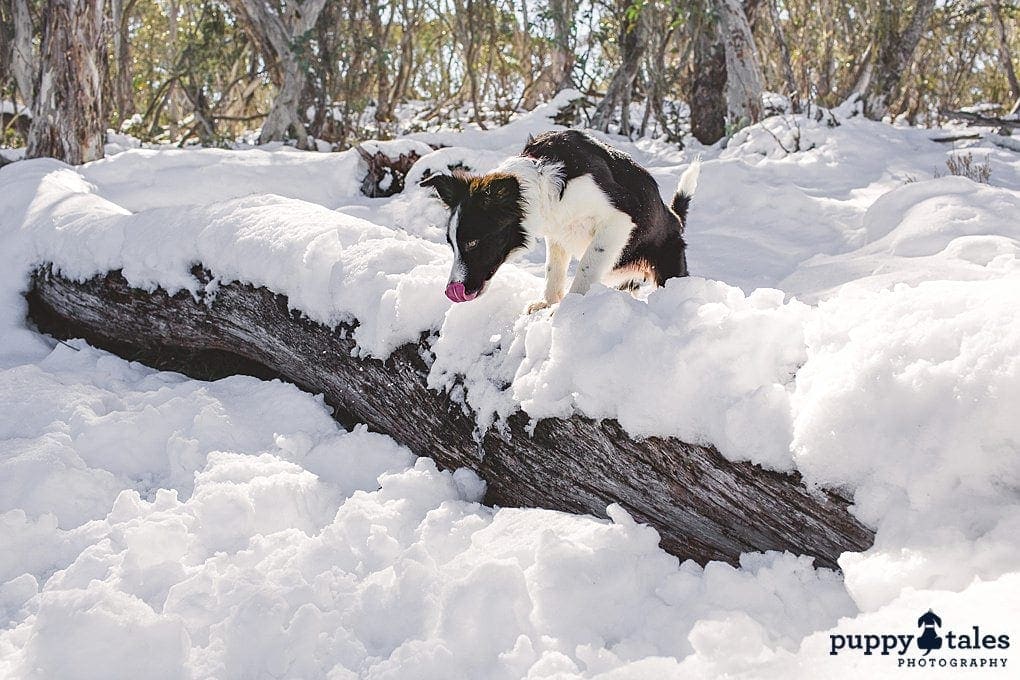 Being called from behind the camera, Rosie naturally ran along the path and jumped over the log (click!) and continued on to a person close by to receive her treat. Border Collies are quick learners and Rosie loved this game.

The perfect shot however is a matter of the right timing in pressing the shutter and Rosie jumping in exactly the shot I was anticipating! That made the key to capturing that perfect shot, repetition! There were quite a few outtakes – some a moment too late or too soon; sometimes cheeky Rosie took a different path over the log (or ran around the fallen log altogether!) or a paw covered her face. We had to repeat until the perfect moment was captured – or my legs froze for sitting in the snow too long! Fortunately, much adorableness was photographed and we all had a blast working with Rosie for the photo. 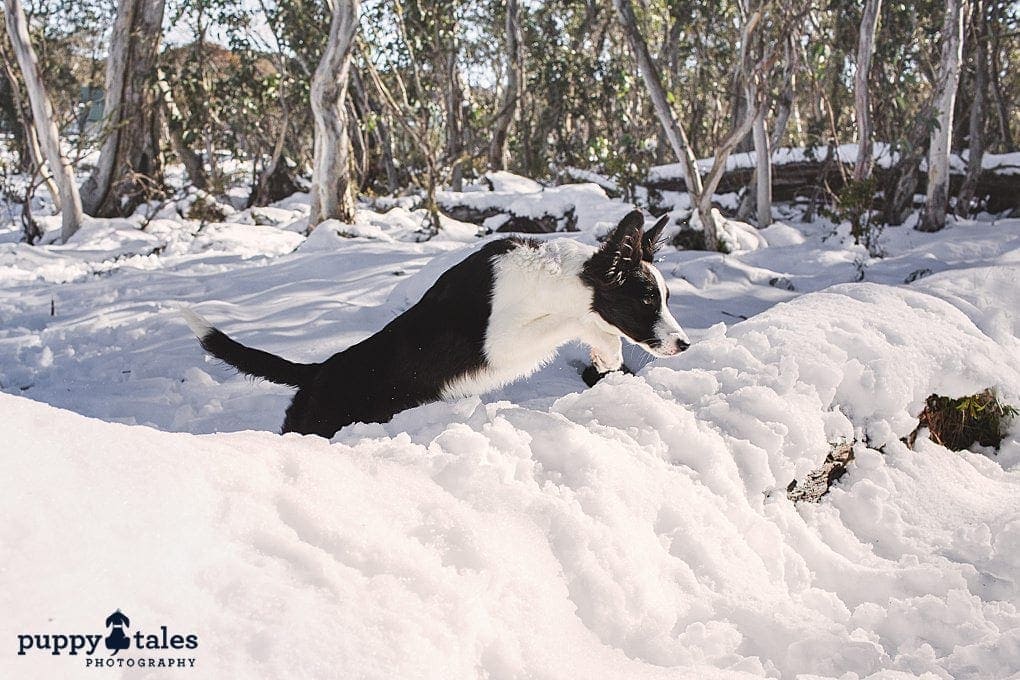 There were two photos I loved the most.  The one you’ve seen at the start and this one: 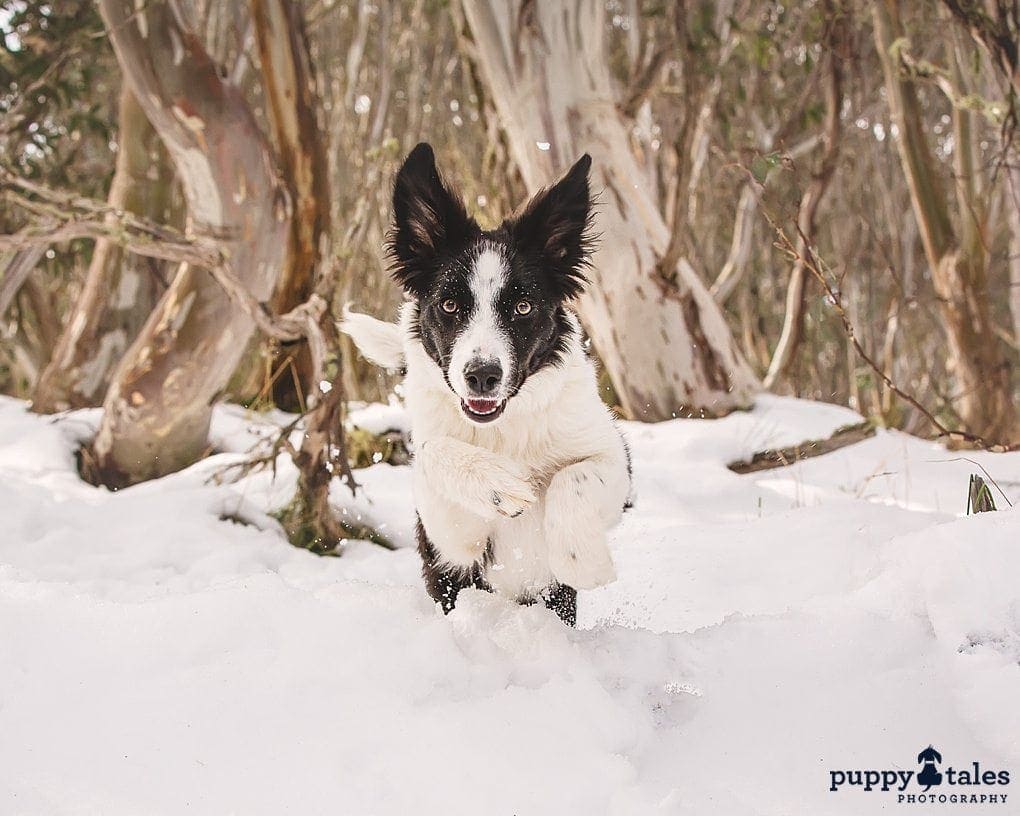 If you want to share the same smile as we do when looking at Rosie’s jump shots and would love to adorn your wall with unique pictures of your dogs in the snow, we are just what you are looking for.

Combine your winter trip to the snow with a fun and exciting photography session for your dogs in the snow, or vice versa!