Brachycephalic or short-nosed dogs: what you need to know!

What could be cuter than the deliciously squeezable face of a Pug? Or more fashionable than a French Bulldog? It’s impossible not to fall head over heals for these ‘squishy faced’ dog breeds. They also make the most brilliant pets and tend to be intelligent loveable bundles of fun with great temperament. This article is certainly not designed to put people off the ‘brachycephalic’ breeds but there are a few things owners should be aware of and a few tips for looking after these adorable dogs.

What is a Brachycephalic dog?

The important thing to know about these breeds is that they often have disproportionately large soft tissue structures around their airways, compared to the size of the skull. This results in a decreased size of the airway, which can make it more difficult to breath. In severe cases the syndrome that results is called ‘Brachycephalic Airway Syndrome’. The main components of Brachycephalic Airway Syndrome are:

The combination of these factors leads to your dog breathing through a relatively small airway. It is like trying to breathe through a narrow straw – which requires increased respiratory effort and creates a negative pressure or ‘sucking inwards’ within the airway. Stenotic Nares can be appreciated by trying to partially close your own nostrils then breathing inwards against the pressure. Negative pressure within the airway can eventually lead to complete airway collapse.

The best advice is to ask your vet to check the airway every time your pet is anaesthetised. An excellent time to do this is when they are de-sexed, early in their life. Early detection of symptoms allows for surgical adjustments before any serious damage to the airway occurs. There are a couple of things that can be done early on if your dog is diagnosed with brachycephalic airway syndrome. One is to resect the soft palate surgically (often at de-sexing) so that it is slightly shorter (generally only a millimetre). This is often enough to open the airway up enough to prevent breathing problems later in life. The second preventative thing that can be done is to surgically widen the opening to the nostrils. This is usually done in conjunction to resecting the tip of the soft palate.

The risk of breathing problems during anaesthesia is increased in dogs with brachycephalic airway disease, but usually only if the dog is severely affected. Often, if an ‘at risk’ breed is to be anaesthetised, they are put in an oxygen tent or are ‘pre-oxygenated’ prior to anaesthesia to reduce this risk. 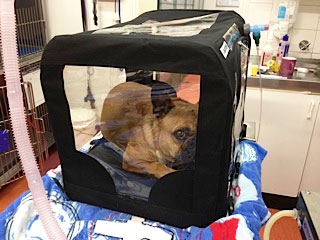 It is best to ensure that any dog with brachycephalic airway disease doesn’t become ‘hot and flustered’. Watch their breathing when exercising to ensure it never becomes laboured. Also be very careful they don’t become too hot. Panting is one of the ways dogs regulate their temperature and if this isn’t efficient then the dog can be very prone to heat stroke, which can be life-threatening in certain cases.

Brachycephalic dogs often have a few extra skin folds, which add to their ‘cute factor’. These folds of skin should be kept clean and dry as these areas are prone to getting infections. Dental care is also crucial, as teeth can be over-crowded in the short face. This is where their good temperaments can be advantageous, as often these breeds will allow you to clean their teeth with doggie flavour toothpaste. This can be a great thing for any breed of dog, but dogs with overcrowded mouths are a bit more prone to tartar build-up and gum disease.

In summary you should not be put off these lovable breeds but if you own one it is best to be aware of the symptoms of brachycephalic airway syndrome. Ensure they don’t get too hot or show any signs of respiratory distress during exercise or rest. Always get your vet to check your dog’s airway if they are anaesthetised as this is the best time to take a look. Finally, if you have any doubts or questions then contact your vet for further advice or a checkup.