Dog: Asher and Louie
Breed: Australian Koolies (Red Merle)
Age: 18 months
Human: Abby
Asher’s Motto in Life: “What would you like me to do now?” or “It’s safer inside, let’s just stay here.“
Louie’s Motto in Life: “Trouble is my middle name” or “Asher’s getting attention – not on my watch!“ 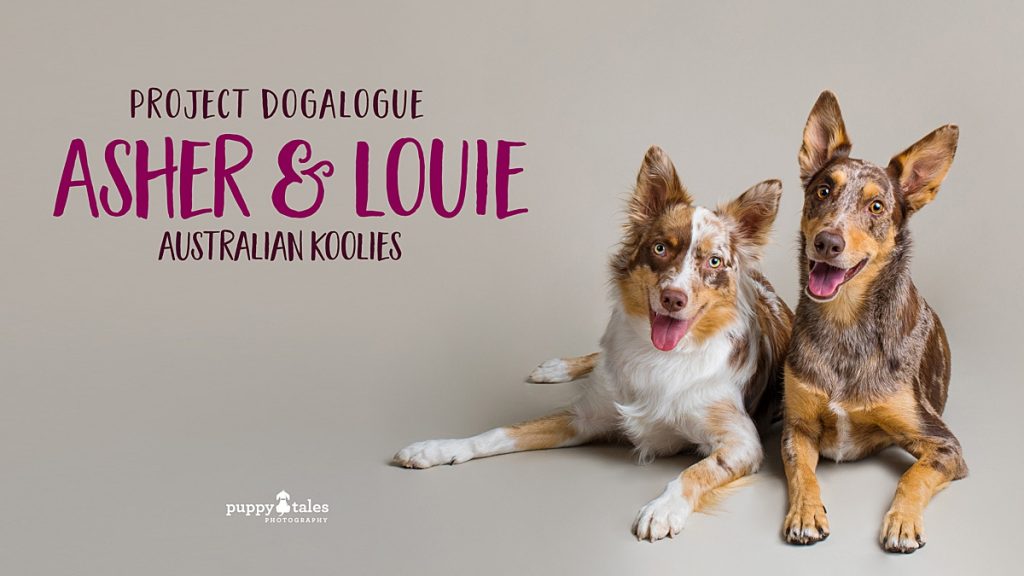 Describe Asher and Louie’s breed paw-sonality? What makes them so special?

Australian Koolies are typically known for the following traits: high energy, eager to please, intelligent, quick to learn, sensitive, affectionate, full of individual personality, and extremely hard working. They are an extremely diverse breed – both in looks and temperament.

They are also very much in tune with their human owner and can read their owner’s body language and feelings as if they can understand English. Despite being one of Australia’s earliest recorded dog breeds, they are the great unknown. 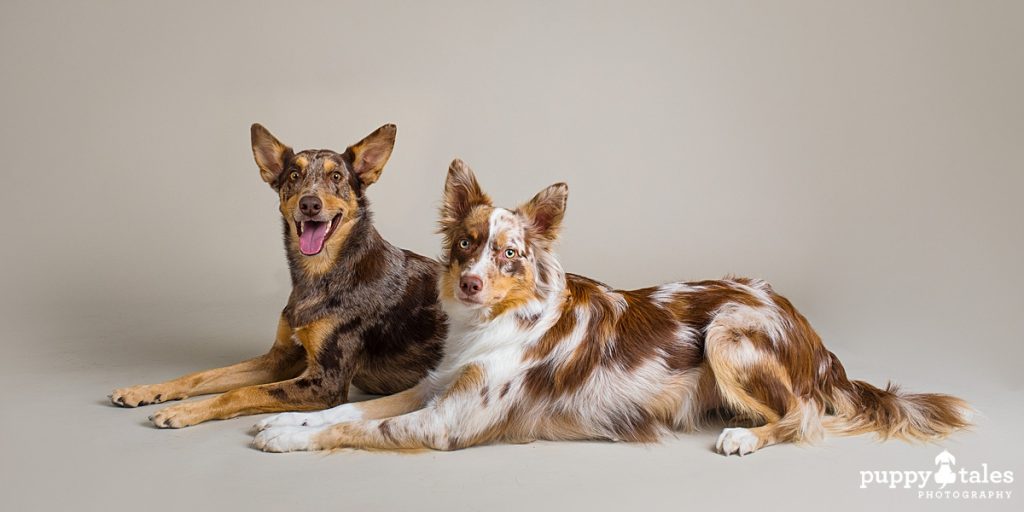 Is this the first time you’ve had an Australian Koolie or do you have a longer history with the breed?

My first family pet was a Border Collie x Koolie x Maltese Terrier. This was when we’d first heard of an Australian Koolie.

FULL ON – but worth it! Fortunately, Koolies tend to be working dogs that come with an off switch. People always say “Oh you have a working dog in the city, you must have such a big backyard and you must need to walk them for hours”, but the reality is, after a good hour chasing balls and other dogs, they are more than happy to chill out for the rest of the day, until the witching hour (around 7pm) when it is full-on play time, even if they’ve had an afternoon walk. I’ve also got a constant shadow at home as Koolies are extremely affectionate and just want to be next to you 24/7 – any chance for a snuggle they will take. 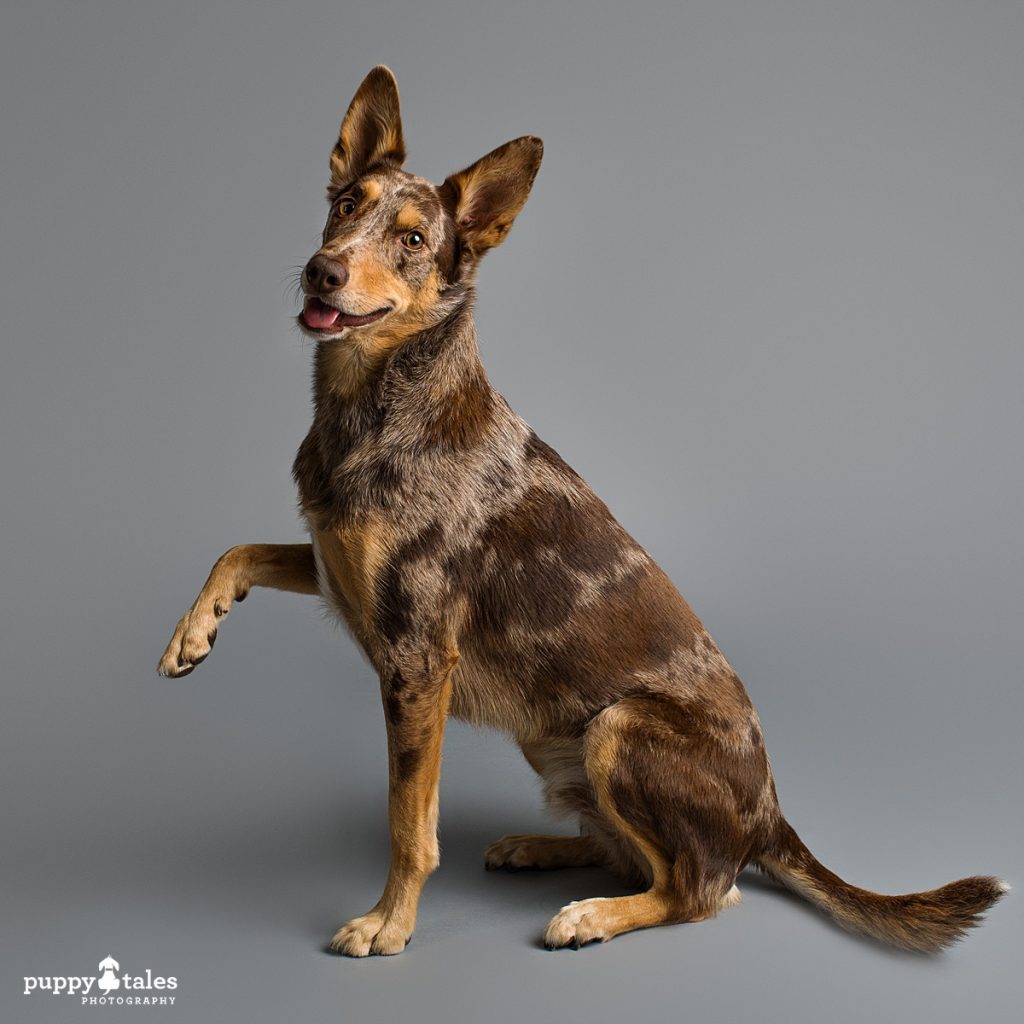 What was different from your expectations of an Australian Koolie, once you had Asher and Louie?

They are both much more needy than I expected. The nervous energy and anxiety isn’t something I expected at all, which makes them a bit more high maintenance. However to balance this, they are much more loving than I had anticipated of a working dog…. and sometimes it’s nice to be needed. 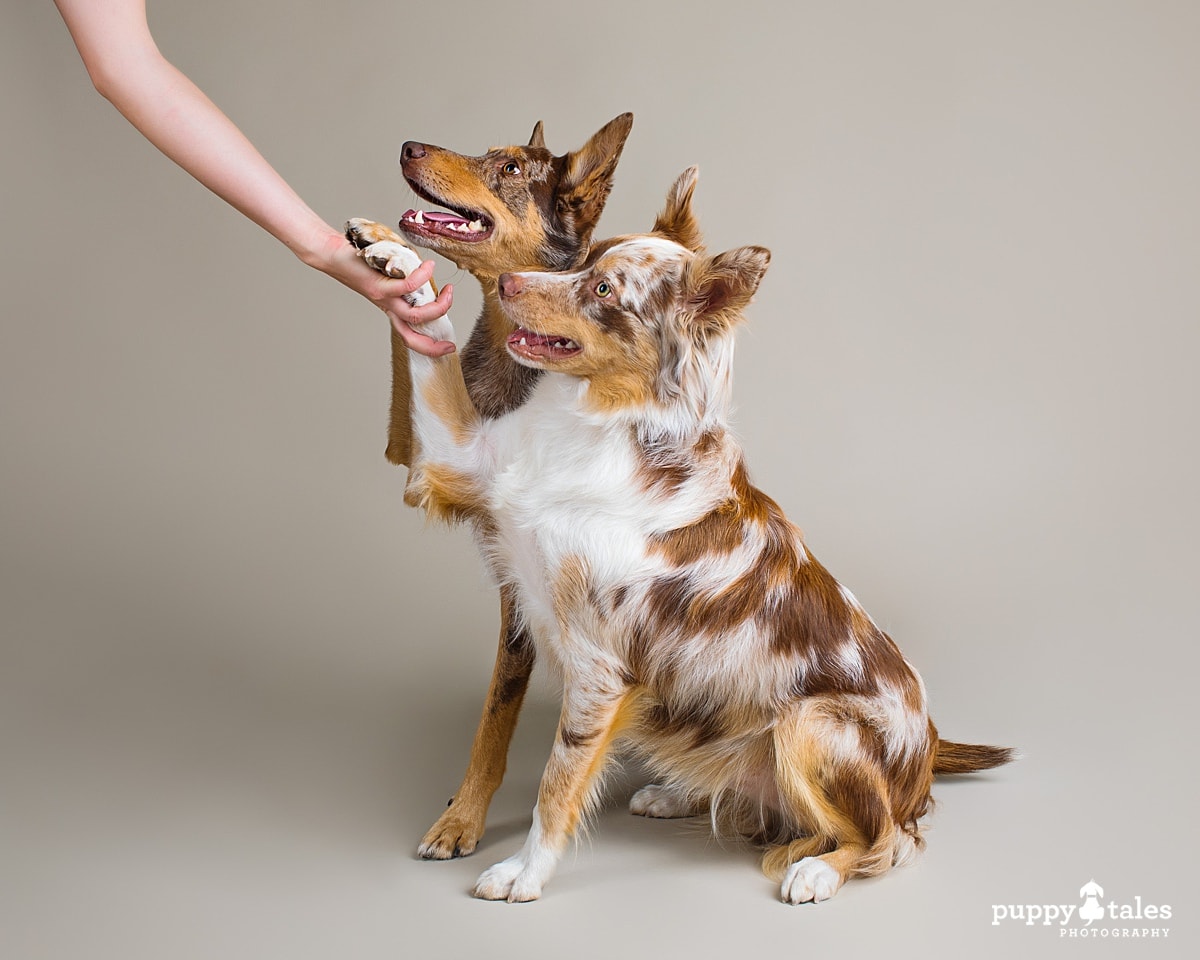 Are they like most other Australian Koolies or do they have some unique traits?

Asher is definitely on the higher end of the anxiety spectrum – he is much more aware of and sensitive to things you’d never expect dogs to even notice (such as a glass of mineral compared with a glass of water), however, I feel this reflects his higher intelligence compared to others of the breed (he is definitely smarter than his brother!). He is a natural at herding sheep (required almost no training) and is extremely athletic even for what is already an athletic breed.

Louie is the clumsy class clown. He doesn’t have an athletic bone in his body, and the only thing he likes to round up is Asher. He cannot catch a ball and he always walks around with his mouth wide open and a crazed look on his face. Louie is one of a kind. 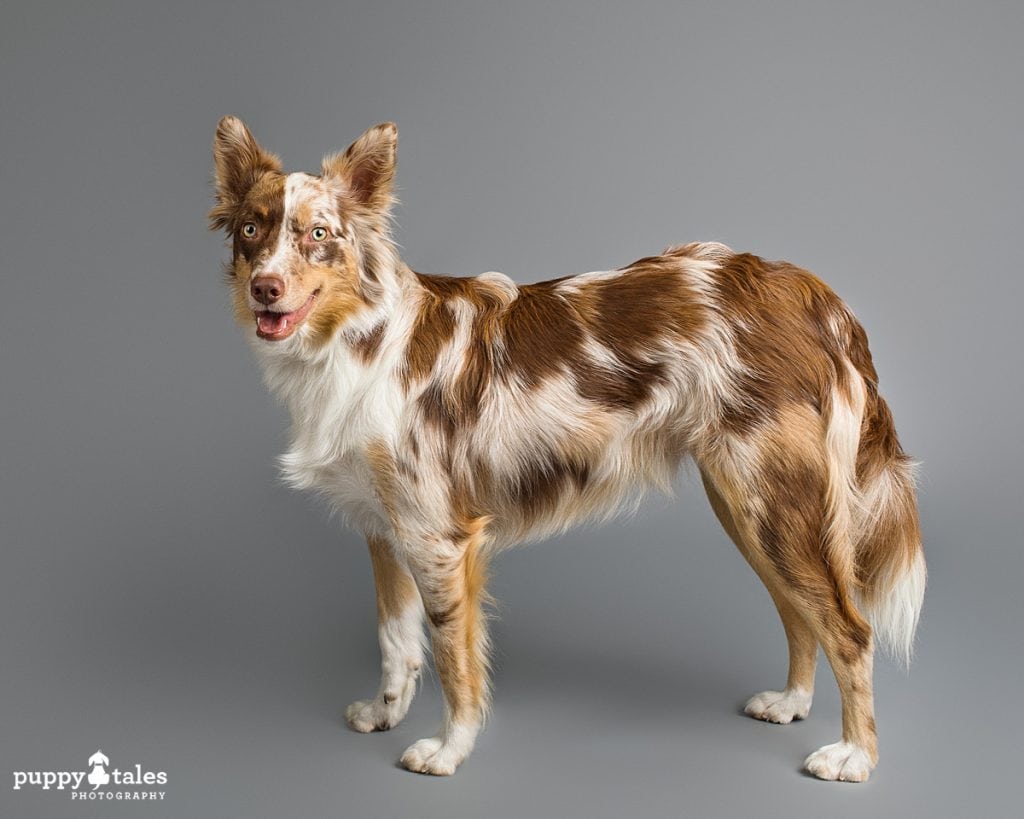 What do you love most about being a pet parent to an Australian Koolie?

Asher is my best friend – I feel like we understand each other. Always there when I need a cuddle and I am always there when he needs a lap to hide in from the scary world. 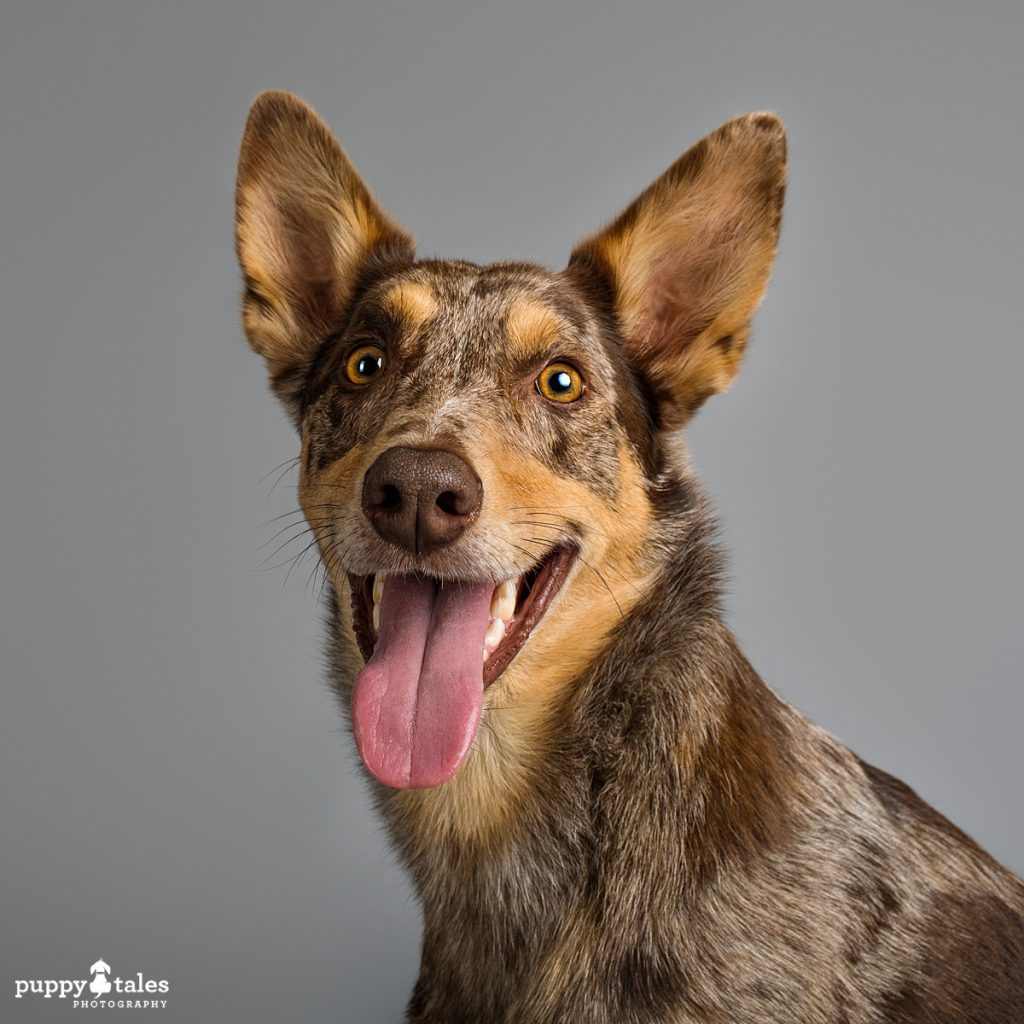 Louie is more like my baby than my best friend. I feel like he needs constant attention but he is like having my own come to life soft toy. He is extremely cuddly and loves nothing more than getting a big hug.

What’s not so paw-fect about an Australian Koolie?

Their sensitivity and prey drive (a common issue with most working dogs living in the city).

What things should others be aware of before getting an Australian Koolie?

Don’t buy a Koolie just because they’ve got an interesting coat or because they look different. Research the breed and make sure it is the right fit for you. They may be smart and loving but that doesn’t mean they are easy. They do require training and constant mental stimulation or your garden is going to be destroyed. 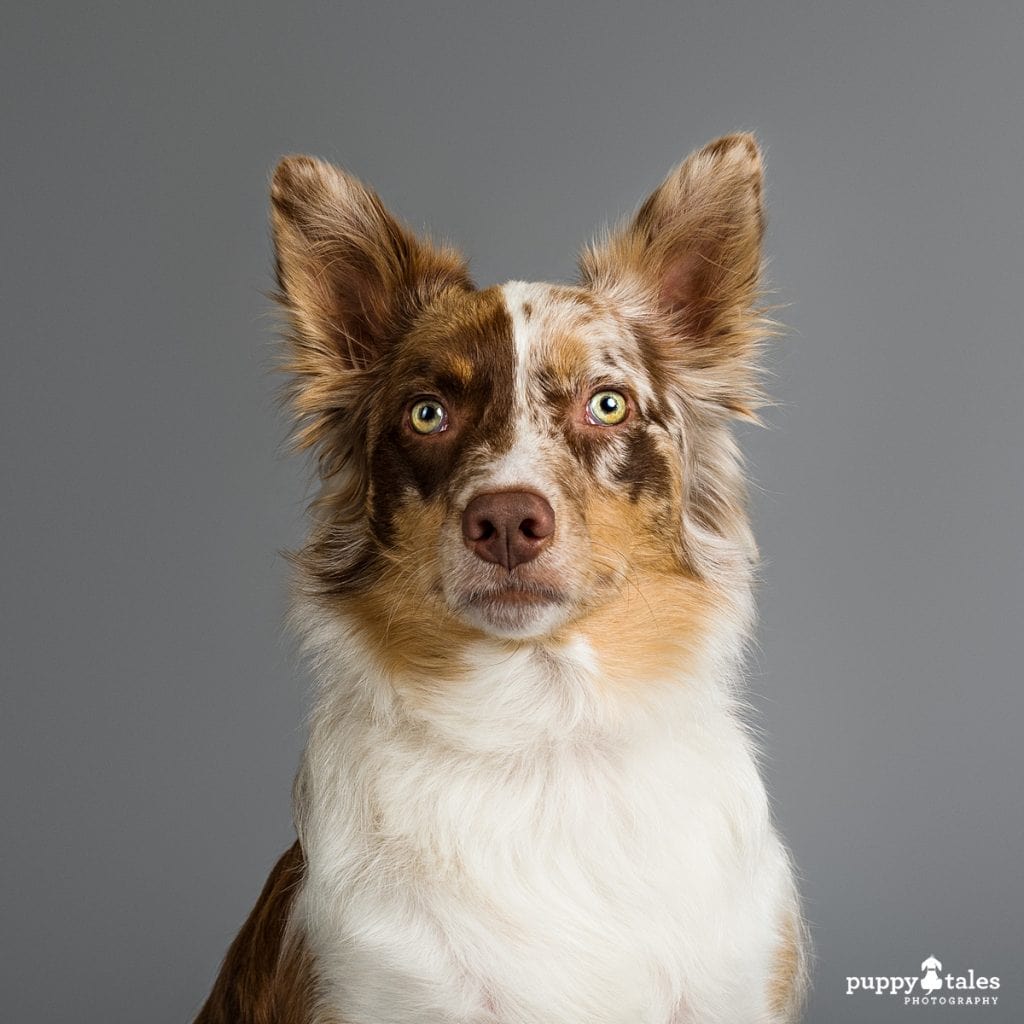 What’s your first memory of Asher and Louie and how did you feel?

Picking them up from the airport and their little faces peering out from the cage. I drove 11 hours to get them (without telling anyone). Louie was the runt of the litter (his siblings could have eaten him for breakfast)! He was getting bullied by his siblings and was scared of human contact. My heart melted but I knew I’d have my work cut out for me – that has proved right.

Are there any events, communities or groups that are especially wonderful for Australian Koolies?

The Koolie Club of Australia (Facebook) and Diggers Herding (which is where I take my boy’s sheep herding).